This is not a “real” chapter.  It’s a tour of the house because I’ve neglected touring you guys, and I actually changed stuff, so yeaa….

Now, in prep for Mihr and Holly’s leaving, bedrooms were switched around, redecorated, and in general, everything was good.  The layout has changed a bit to allow for an elevator instead of stairs.  I’ll be showing you the first and second floor, since there’s nothing but shame on the third floor, filthy filthy shame that needs to be remodeled.  Actually, its pretty empty and I need to decide what I want to do with it- because the elevator placement makes it kinda funky…

Anyway, before we get started, you’ll be seeing the game paused, with all the sims present, including Holly and Mihr, and you won’t be seeing the Skills/Party Wing today, gotta do some editing on that one.  Lets get started!! 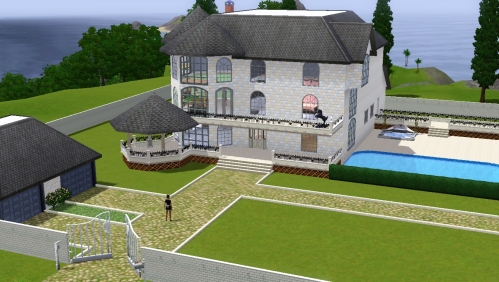 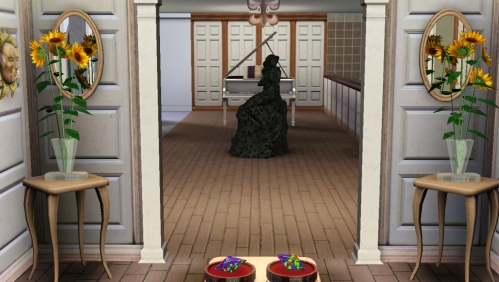 To the Right – Dining Room that leads to the Kitchen.  Straight is the formal living, and to the left is the family room.  We’ll go Dining -> Kitchen -> Family -> Portrait Studio (between Family and Living) -> then Living. 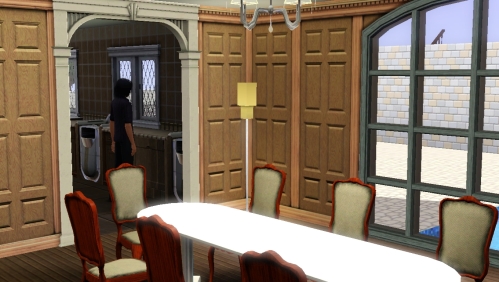 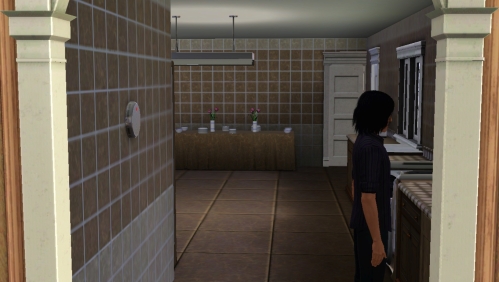 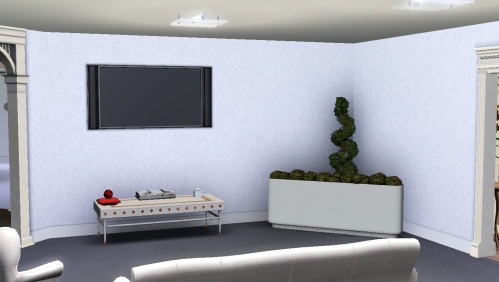 You can see the edges of archways, to the Right is the Foyer, to the left is the Portrait Studio. 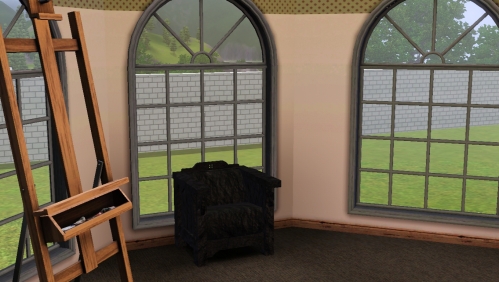 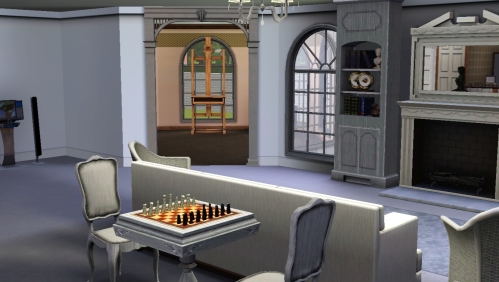 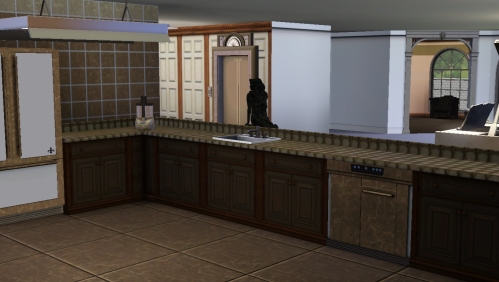 Now lets head upstairs, where you’ll just get an overhead view since navigating the hallway would be hell. 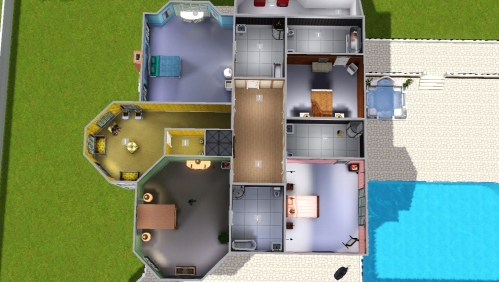 The bottom left room (green) is Chris and Anapiel’s – the bathroom to its right is theirs as well.  Chris is in there.  The Pink bedroom next to that is Anahel’s new room, Mihr and Holly used to occupy it, but since they’re going away now, its hers (she’s in bed).  The bath above her room is hers, then there’s Phul’s room and bathroom.  To the right of his set up (where he’s in the shower), is a bathroom connected to a vacant room.  The yellow room is the nursery, and the inset room holds the two training potties- so they don’t stink up the nursery.

And that is the house.  I’ve had the urge to destroy the core (keep the outside the same) and redo most of it, but resisted for the most part.  Maybe when the toddlers are children and are at school I can kick everyone out and do so.  Hope you liked this “filler” chapter!

Because it made me sad that I can’t play the Harks because of stupid Mihr and Holly….

Who might just end up dying in a pool “accident”. . . The temptation to kill them is getting hard to resist, but I’ve tried my best to not intentionally kill any of the Harks sooo…  ._.  But we’re in the 5th generation, what harm will it do?  Who knows, See you in Chapter Eighty-One.

Well, An Update Is Coming, Just Not Fast Enough!!

I read today that there will be an update around the time that Generations comes out- YAY!  The Harks can finally continue!!  I’m having a lot of fun with the Caldos though, but I can do both… I think.  I will, for the record be getting Onoel and Nanael the imaginary friend dolls if I can, not to mention Strollers!  But until the end of the month, it’s looking like there will be no Harks unless I kill Mihr and Holly.

While you wait, go vote for my Gen3 Heiress over at the Caldos : Link.
And possibly read the Caldos : Link.
For those of you who do read this; let me know if Mihr and Holly should be offed so I can continue, because I simply cannot decide.